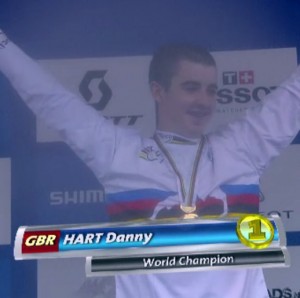 I’ve just got back from the 2011 MTB World Championship Downhill race in Champery, where Danny Hart rode a legendary race to become the 2011 champion.

The conditions today were difficult to say the least. The rain has been constant all day, varying between heavy & torrential. The Champery downhill course is testing at the best of times. Add in heavy mud, small rivers pouring down the course and low visibility, and most riders were fighting just to stay on their bikes.

The fastest times were set by the riders mid way through the race, and as the rain got harder, and visibility got worse, it looked like all the following riders would fall by the wayside.

Then Danny Hart took to the gate. He nailed the route from the outset, taking new lines and carrying speed through even the hardest & steepest sections. As he came into the final section he even managed to through in a couple of whips so big he was almost horizontal. Then he crossed the line over 11 seconds faster than the previous leader.

The Champery course made a legend of Sam Hill after his amazing run in 2009. In 2011, Danny Hart ecplised that and proved he is truly king of the mountain.

Following Danny, Gee Atherton crashed a couple of times coming in covered in mud. Even Arron Gwin who looked very dangerous at the start managed to crash and came in twelfth.

All of which meant that the 19 year old from Redcar was crowned 2011 World Champion. Good work Danny. 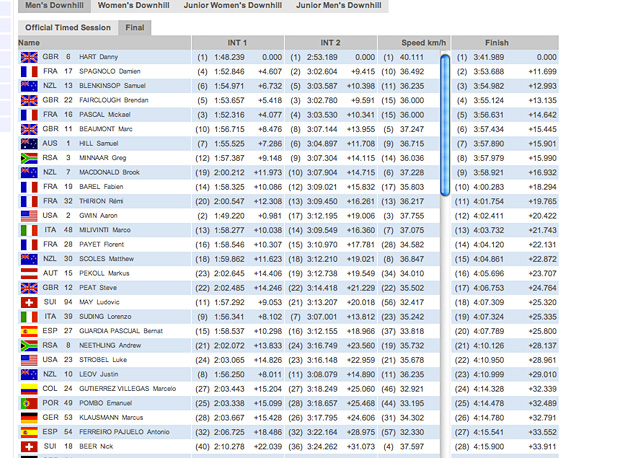