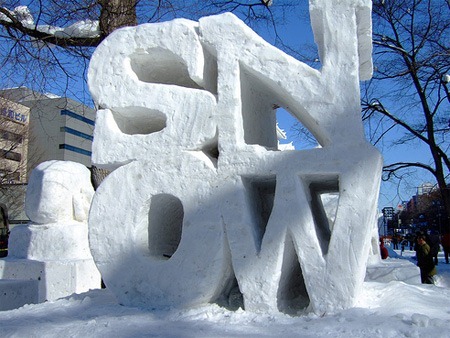 I know it is mid June, but waking up to snow on the tops of the mountains in Chatel has got me thinking about winter already, and of course, snow!

Making snowmen is a popular way for children to entertain themselves during the winter months. It’s a great winter tradition. Two giant snowballs, some lumps of coal and a strategically (or comically) placed carrot – and that’s usually about it.

However, some people have taken their snow sculpture skills to the next level 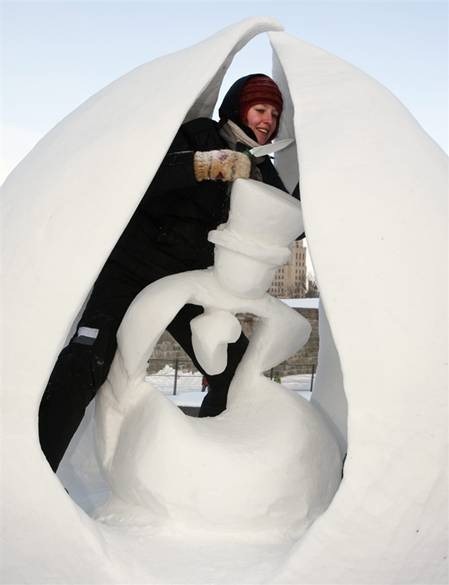 These snow artists will go the extra mile to bring some drama to the rather tame world of snow art. We’ve found fourteen of the most spectacular snow designs for your entertainment. 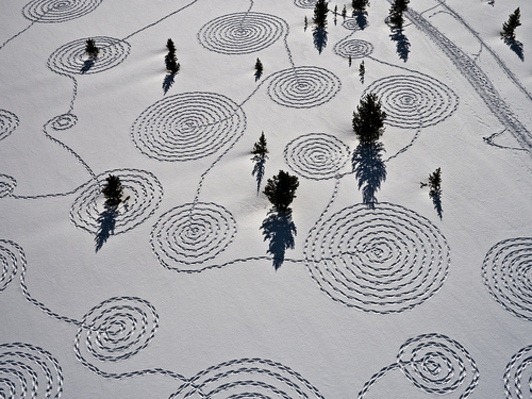 There is nothing better than running though a field of freshly fallen snow; for some reason we humans are simply compelled to do it. 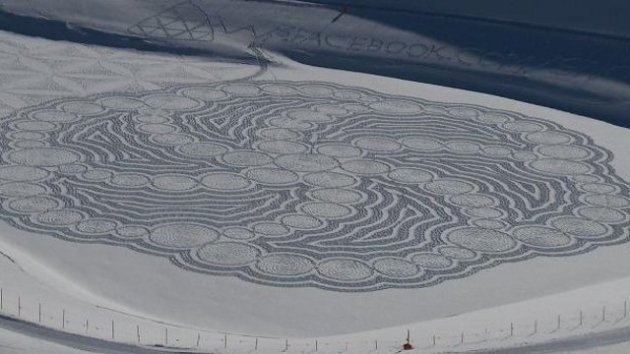 Perhaps other animals are compelled to do it too, but I guess we’ll never know. If you’re lucky enough to own a helicopter with a tracking camera, you may want to consider some ornate and delicate snow art too. 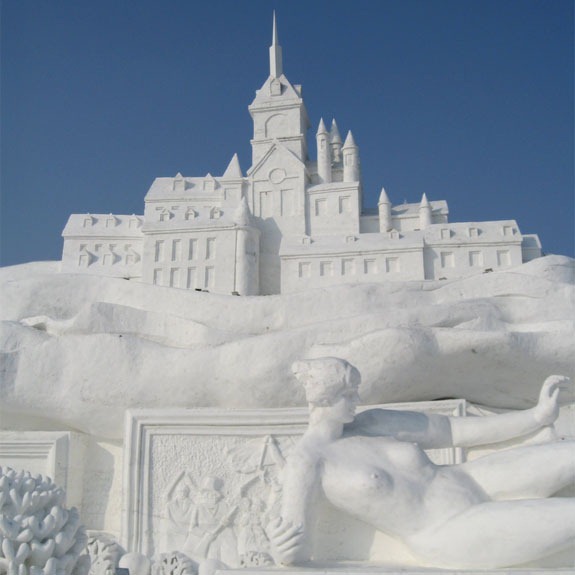 These guys need to apply themselves more. They could have at least built a helipad on this snow palace. Quite how they managed to create something as wonderful as this is beyond me. I hope they registered for planning permission from the correct authority.

I’d hate to see it destroyed because of litigation. 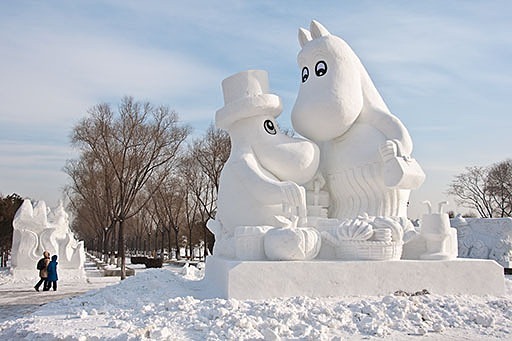 Ahh! Moomin – what were you? Part hippo; part pig; all heart; and in this case made of snow and an entrant in the Harbin snow sculpture fair.

Moomin would waste his days looking at flowers and staying well clear of that troublesome Little My. 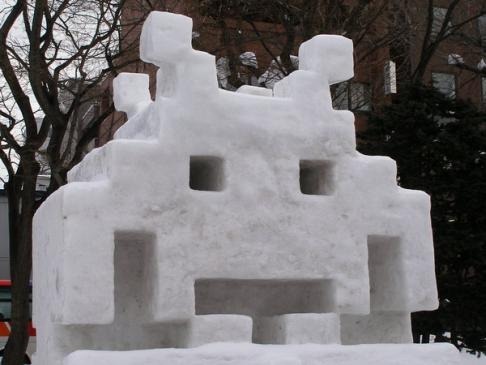 This shape usually strikes fear into the hearts of 40-year-old gamers. The blocky visage of a Space Invader is certainly something that sets the pulse racing a little, but this one isn’t likely to harm you… unless you get frostbite from cuddling it. 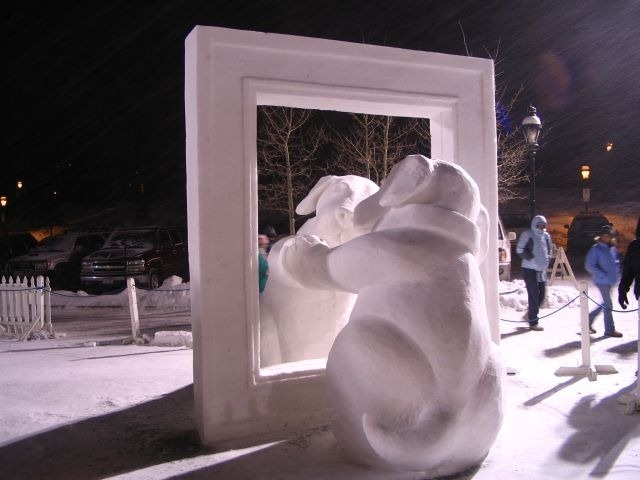 This is a nice optical illusion. We all know puppies can’t get their heads around mirrors, but have you ever made a snow sculpture about it?

This guy did, and it looks awesome. 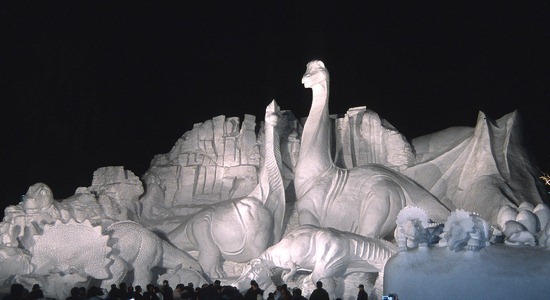 Everyone loves Jurassic Park. This sculpture really shows off the magnitude of dinosaurs.

I bet everyone who saw this started humming John Williams’ score.

I bet you’re humming it now. 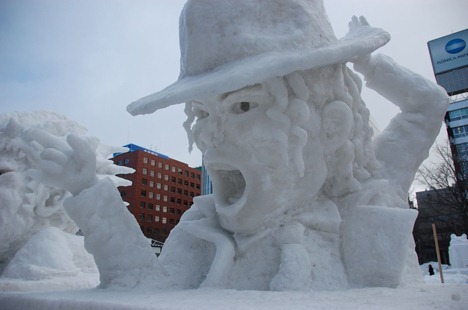 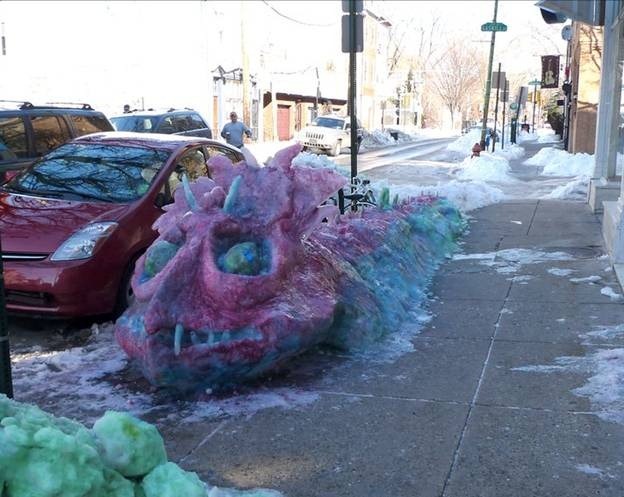 Everyone hates the end of the snow season; nothing but brown slush and overflowing drains. Some use this horrid time to emphasize their creativity, just like this impressive sculpture. Having just scraped enough snow together to create an oriental dragon, they even had the foresight to paint the thing red. 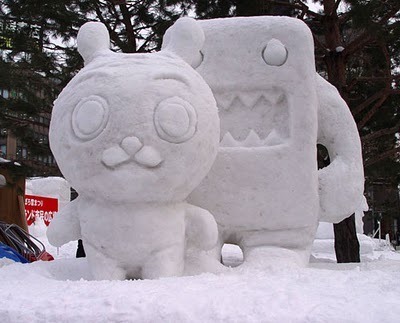 Ah Domo-kun – what are you? Part bear; part box; and utterly irrelevant to anyone who hasn’t fully immersed themselves in Japanese culture. 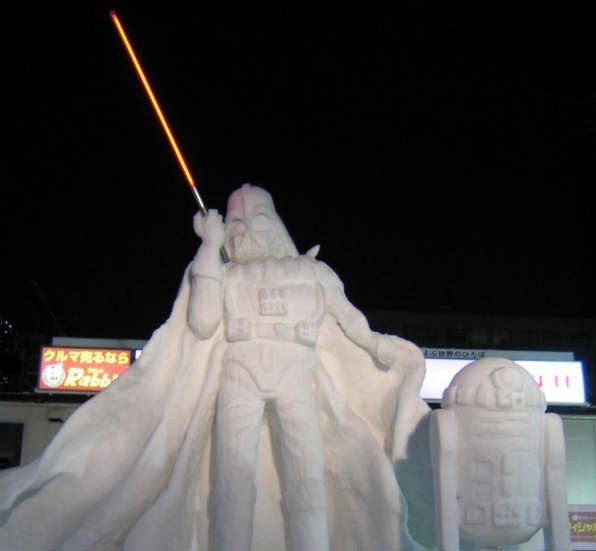 Ah, the force is strong with this one. Here we see Darth Vader and everyone’s favourite bleeping pedal bin R2-D2. While old Ani isn’t quite as threatening as we’ve seen him in the past (he needs a firmer grip on that lightsaber for one), the creator has pulled off quite a feat.

It was also quite wise of him not to have made a Jar-Jar Binks one… it wouldn’t have lasted five minutes. 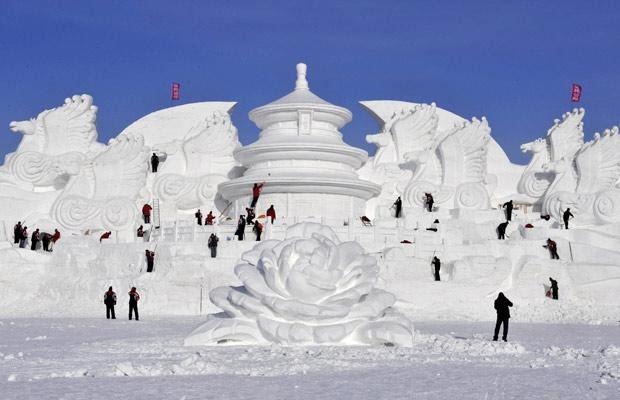 You’ll remember this one the next time you try to make an igloo from hastily packed blocks of snow. Your efforts will always be laughable in comparison. This majestic creation features its own hall of prayer for good harvest, whereas you’d be lucky if your roof didn’t cave in. Magnificent. 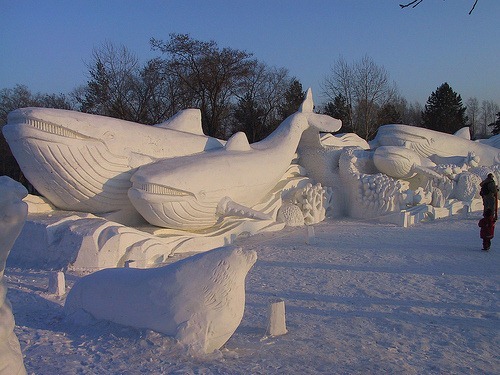 Graceful and epic, the whale has captivated onlookers since the birth of looking at things. These creations make up a diorama of sea creatures shown at the Harbin snow fare 2010.

We couldn’t even manage a prawn. 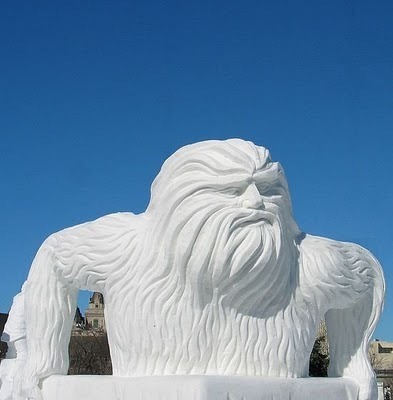 I know what you’re all going to say, and you’re all wrong. It’s not Chewbacca, it’s Old Man Winter, and I imagine he’s getting very tired of being referred to as a giant fictional walking carpet.

The resemblance is uncanny however, which leads us to wondering if they’ve ever been seen in the same room together? Hmm. 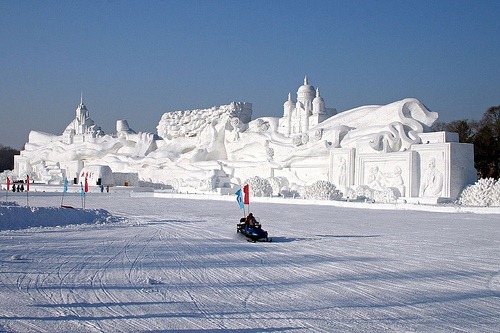 So, here it is; the largest snow sculpture ever created, and it is a monster… not literally. Entitled ‘Romantic Feelings’ and presented at the Harbin snow festival 2008, it stands at an impressive 35 m tall and 162 m long. We feel inadequate. 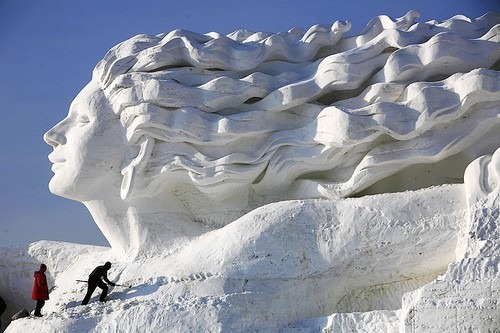 If you are feeling a little over-stimulated by all the excitement and beauty of some of these monolithic creations, then fear not. Some avid snow builders like to keep things simple, even when faced by the intricacy on display from other creations. This is the largest snowman ever built, and before you ask, yes he does have pine trees for arms. 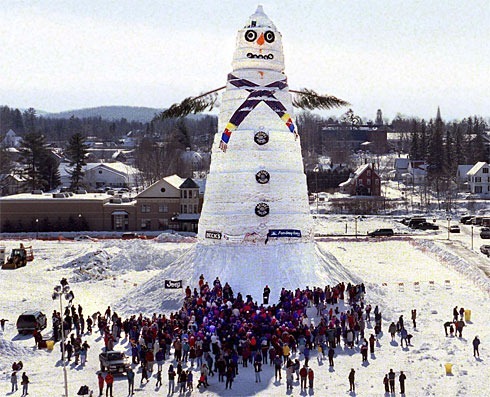 His name is Angus King of the Mountain, he was built in Maine and he is 113 feet tall. Enjoy the spectacle because he’s probably melted by now. A shame.

So next time you see snow, whether it is your own back garden in the UK, or while you’re on your ski holidays, try and be a bit more creative with your snow sculptures! Have fun out there!