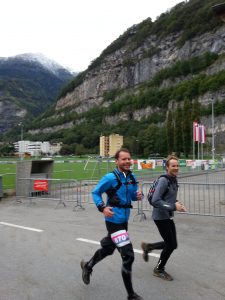 Update – 25 September, 2013 – I have been overwhelmed by the amount of support I have received. Two weeks into trying to collect sponsorship, I have now exceeded my target. Thank you so much for everyone who has sponsored me. Now all I have to do is run nearly 70 km in just over 2 weeks time! Yikes.

Back in September 2012, I found myself in Chamonix the same weekend as the  Ultra Trail du Mont Blanc, a grueling race of around 168 km and 9600 m of positive altitude change which takes anything between 21 h to 46 h to complete. Rather than watch this and think “these folk are crazy”, for some reason it made me want to try ultra trail running.

4 weeks later and I found myself lining up to start the St Maurice Ultra (The Défis du Jubilé), a trail run through some historical biblical sites in the Swiss canton of Valais. Not quite the monster race that the Mont Blanc Ultra is, there are a number of stages ranging from 7 km to 68 km. Given the lack of training, and the fact that it was my first, I opted for the 52 km race. And amazingly I achieved my two goals…to finish and to not come last!

Rather than get it out of my system, I now have a taste for ultra running, so this year on October 12th I will be going for the full 68 km race, with over 2000 m of vertical gain covering all seven stages in one day. And in doing so, I have decided to raise some money for a small charity in the UK, Little Hearts Matter, a worthwhile charity which offers support and information, and raises awareness of those affected when a child is born with a rare heart condition (such as Hypoplastic Left Heart Syndrome).

If anyone out there would like to sponsor me for this good cause, you can do so via my Just Giving page.