Located in the Northern French Alps, close to Lac Leman, the Portes du Soleil is the largest linked ski area in the world.

Created 40 years ago, this giant ski area straddles the French/Swiss border and brings together 12 resorts in both countries. The international flavour  of the domain means that you can start the day eating croissants in France, and lunch on the slopes in Switzerland eating Rosti!

Because the ski area physically covers such a large area, it is perfect for those who like to clock up the miles when on skis. However, each individual resort is well suited for skiers and boarders of all levels. Overall the area’s statistics make for some impressive reading;

Some Attractions in the Portes du Soleil

The snowy slopes of the ‘Ludoffaz’ in the centre of the village are the ideal place for the whole family to try a huge range of wintersports activities.

Everyone from toddlers to grown-ups can try skiing and snowboarding in an environment where safety comes first. For more thrills there’s sledging (alone or in a chain!), rubber-ring sliding and airboarding for a no-holds-barred ride! For pure enjoyment there’s a ski lift and magic carpet to take you straight back to the top! 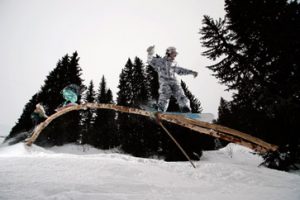 Inspired by Northstar Resort in California and developed by Jake Burton… yes, that Jake Burton !

o like having a bit of fun with their mates should check out The Stash in Lindarets forest. The track winds through the woods with all-natural wooden obstacles at regular intervals. Look out for the Flat Log, Rainbow, Step Up and Wall Ride which you can test under the watchful eye of the forest’s yetis…

Hidden routes lie at the forest edge which lead to the secret log cabin where you can carve your own message – chances are you won’t find this cool new riders’ retreat on your first (second or third) run down!

The new 6-man Crêt Béni chairlift on the north face of Mont de Grange leads to the plateau which is ideal for beginners. More experienced skiers can rejoin the resort far below at the bottom of the Cerf piste. All visitors should keep an eye out for the wild deer which roam the nature reserve on the slopes of the Abondance valley.

The park makes use of the hilly terrain to create a ”slopestyle” space more than 800m long – in short, it’s paradise for intermediate and advanced riders with all kinds of boxes, ramps and drop-offs…

Les Gets – The Grand Cry Territory

A playful and educational discovery route for 5-12 year-olds to do with their skis on. Pure fun with red Indians and trappers to see and bumps, woops and raised bends to tackle.

Budding skiers can have their faces painted by the red Indian-entertainers near the teepees half way round the course.

For a perfect end to your visit head for the Trappers’ cabin to attempt the games and musical challenges!

Montriond is home to one of the longest runs in the Portes du Soleil: Abricotine. Starting on the peaks marking the French-Swiss border, the piste travels over 8km before arriving at the foot of Ardents cable car. With its blue and red sections Abricotine can be tackled by most skiers; it also has plenty of surprises to keep you focused.

Morzine – Arbis red run from the top of Chamossiere

From the highest point in the Morzine-Les Gets ski range, the Arbis run offers skiing for all abilities and breathtaking views! Link it with the Lievre and Retour des Nants pistes and you’ll be back in the centre of Morzine having covered 8km and a 1000 m descent in one go!

The Roc d’Enfer circuit in Saint Jean d’Aulps is more than 20km of pure pisted pleasure! Departing from the Col de Graydon there’s also a walk around the fabulous Roc d’Enfer with breathtaking unspoilt scenery to explore full of spruces and hamlets.

Quite simply a Portes du Soleil classic. From the Ripaille T-bar ski down this long run that sweeps past farms lying below the stunning Dents Blanches rockface. It’s so tranquil you almost wish it would never end…anyone in search of fresh tracks will find all the untouched powder they’re looking for on the edge of the slope.

From the centre of Morgins village take the chair up the mountain which will drop you off slap bang in front of the Dents du Midi peaks before you can say ‘abracadabra’. The blue (which is in fact a red!) leading back down to the resort is floodlit 2 nights a week so you can ski underneath the stars…ski touring fans take note: Friday night is traditional climb night! 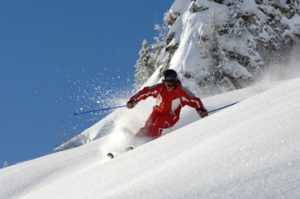 On the way up this little-known spot appears beneath your skis or board. With its steep ride and excellent snow, it’s a favourite for local riders. From the top of the Tronchey chair you simply point yourself downhill and let the huge powder arcs begin with the Rhone river plain far below to provide a magical contrast… 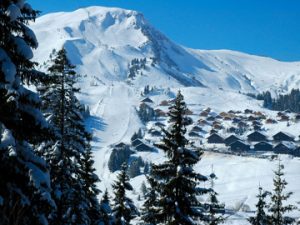 Champoussin’s Aiguille des Champeys is a firm favourite for those in search of powder – whatever their level. With its steep ‘n’ deep couloirs and enticing untracked snow at the piste edge there’s a slice of happiness there for all freeriders!

Accommodation in the Portes du Soleil

Accommodation wise, the Portes du Soleil has property for all occasions – from traditional chalets in the beautiful mountain villages, to ski in/ski out apartments in the purpose built high altitude resort of Avoriaz.

We have a huge range of self catered ski accommodation to suit all requirements available to rent in many of the Portes du Soleil’s major resorts. Follow the links to discover our accommodation in: Abondance, Avoriaz, Châtel, La Chapelle d’Abondance, Les Gets, Morzine, Avoriaz, Champéry, Torgon, Val-d’Illiez – Les Crosets – Champoussin.

The Portes Du Soleil ski area has an enviable snow record. Its proximity to Mont Blanc and Lac Leman creates a micro-climate which means that the area tends to get significant snowfall from the start of December through to when the lifts close in late April.

Because most of the lower slopes are pasture land, depths of 10-20cms are often all that is required to open the pistes, compared with higher altitude resorts where a metre or so is needed to cover the rocks.

Those in the know have long since discovered that the Northern French Alps have some of the best and consistent snow conditions to be found anywhere across Europe. Over the last few seasons, the Portes du Soleil has had fantastic conditions while at the same time the higher and so called “snow sure” resorts in the south of France have been sorely lacking in snow. Come and find out what all the fuss is about…!